You don’t always see dedicated psychiatrists running out of their offices and going the extra mile to treat patients with emotional wounds. Ironically, that’s exactly what many would need–especially when these patients refuse the idea of getting any form of psychological treatment.

Dramas about psychiatrists may not follow the way real psychiatrists treat their patients accurately, but they strive to achieve a simple, common goal–healing and warming up viewers’ hearts with every patient’s healing journey. It’s even more so if these patients have relatable problems and stories.

If you are yearning for an emotional break, or simply want to warm your heart up, you have a new drama to follow!

What is this drama about?

“Fix You” revolves around psychiatrists doing their best to mend their patients’ emotional wounds.

Psychiatrist Lee Shi-Joon is best known as the eccentric doctor. He enjoys playing “push-and-pull” with his patients and is willing to do anything to treat his patients. Even when he faces serious situations, he doesn’t lose his sense of humor and would continue to spread positive energy around.

She could run really cold one moment and really hot in the next. In just seconds, she runs from piping hot to icy cold, and her emotions go back and forth between two extremes. On top of that, she has a strong sense of justice and is very passionate.

Han Woo-Joo was an up-and-coming musical actress–at least it was until that very fateful event. As a musical actress, she doesn’t rely on extraordinary talent, instead, she worked her way up through hard work and practice. Being up onstage means so much to her, but Woo-Joo has a huge problem. She struggles with anger management and frequent mental breakdowns.

In Dong-Hyeok (Played by Tae In-Ho)

He believes that the problem lies in the brain and not the heart. Psychiatrist In Dong-Hyeok thinks that prescribing pills is the most effective way to treat his patients. His ambition is to be the best psychiatrist.

Here’s an interesting teaser for “Fix You“!

“Fix You” has started airing on May 6 and there are currently 2 episodes available to watch on KOCOWA. You can catch up with the latest episodes of “Fix You” by subscribing to KOCOWA!

Here are 2 other dramas that involve healing patients with emotional wounds. Check them out!

Do you like watching dramas that revolve around healing patients who are emotionally hurt? Which of them are your favorite?

Jeon So-Min Joins Lee Kwang-Soo’s Agency, and is Returning Back to “Running Man” 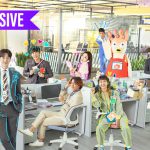