We all know that a body swap will never happen in real life. But still, we will never know what can happen in the future, like how characters in body-swap dramas were in disbelief when it happened to them for the very first time.

In Spring Turns to Spring, the characters go through not just once, but a series of uncontrollable body-swaps. At times, they take advantage of the opportunity to get out of a dire situation. But most of the time, it is the root of all disasters that happened to them.

Before beginning, below is a quick introduction of the characters from the drama, Spring Turns to Spring, who are perfect role models for this disaster edition.

Lee Bom used to be a popular actress but is now married to a congressman. She is a gentle and refined housewife who dedicates her life to her family. Lee Bom loves counting calories of the food that her family eats. She can’t stand the sight of a speck of dust. Her favorite tagline: “This isn’t right!”

A TV anchor-woman who is rough and disorganized. She would do anything to achieve her goals. Bo-Mi focuses only on climbing the career ladder. At home, she lives with bits of chips sprinkled on the floor, unwashed clothes scattered everywhere, and… cockroaches.

Here is a guide on how to pull through if a body-swap really happens (heavily inspired by the drama “Spring Turns to Spring”).

1. Try your best to keep up with your body swap partner’s daily tasks. (Episode 3)

It is important to work together with your body swap partner and ensure that your lives aren’t badly affected by the swap. Let your partner finish your duties for you and you take on your partner’s role for the time being.

Kim Bo-Mi cooks up a meal for Lee Bom’s family but fails to find broccoli and made a mess in the kitchen.

Lee Bom is touched by the news story she is reporting and cries during the live broadcast.

Things may not turn out as perfectly as it should, but at least, the task gets done.

2. If your partner’s daughter is making weird hand movements in front of you, which only the mother and daughter know about, stay confident and ask her calmly, “Do you want to fight?” (Episode 4)


3. Let your partner suffer from your insomnia and enjoy a rare, undisturbed sleep throughout the night. (Episode 4)

It’s also perfectly fine to deny that you snore while you sleep, because that body isn’t yours after all.

4. When the swap happens again, run away and attract the attention of the people around you. (Episode 5)

While you are both back to your own bodies, have your partner who is an anchor-woman, report that news story of “herself” nonchalantly. (Episode 6)

5. If your partner doesn’t want you to apologize to anyone on her behalf, don’t do it.  (Episode 6)

But if you happen to do it habitually and only realized it after that, turn away and whisper in front of the person you apologized to, “I’m not supposed to say this.”

Grab a stamp ink pad and leave your thumbprint on the document instead.

7. If you were forced to write up a resignation letter on behalf of your partner and your partner reprimands you for doing as told… (Episode 8)

Sneak into the manager’s room and stuff the resignation letter in your mouth.

8. Ignore the fact that you’ve swapped bodies with someone, continue to treat your daughter like how you always do. (Episode 8)

And… lead her into thinking that she has a hidden, biological mother.

9. If your wedding is ruined by body swaps, make your body swap partner break up with your fiancé on your behalf. (Episode 11)

…By writing a script and making her recite it. It doesn’t really matter if she has a good memory.

At the same time, don’t hesitate to write a script just in case she runs into your boss. When the opportunity comes, she’ll be able to recite the script in front of him and threaten him on your behalf. That way, you might be able to secure your job.

Or maybe, don’t try any of these… unless you’re asking for trouble.

That said, the above are only a few of my favorite scenes in the drama that had me laughing so much. This quirky series may be lacking in logic and scientific explanations, but it’s filled with hilarious scenes and is a great stress reliever.

What are some of your favorite scenes from this drama? 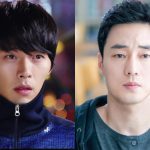 Boys to Men: Hyun Bin and So Ji-Sub